Audio description has opened up a whole new world of arts for people who are blind or partially sighted. Linn Martinussen spoke to Toby Davey, Deputy Director of VocalEyes, a charity which has been providing audio description for various areas of the arts since 1988. 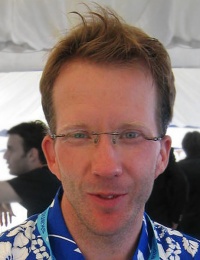 At VocalEyes we ensure the best possible quality by using two describers. We also provide introductory information on audio CD and as a download in MP3 from our website. We provide a touch tour of the set prior to the audio described performance and we also try to ensure that the meet and greet at the theatre or venue is as welcoming as it can be for blind and partially sighted people.  The introductory notes and the touch tour of the set – with the possibility of touching some of the props and meeting the actors – adds so much more to the audio description experience.

Is the introductory CD an equivalent of the program?

No. We include specifics from the program, such as what the writers of the plays, or producers or critics might have said about the show, but the focus of the CDs is to give the viewer information on what they’re about to see. Some, but not all theatres include programs and cast lists in accessible formats.

You offer both a CD with a full description of the set and characters plus a touch tour. How, added to the audio description itself, does this enhance the experience even more for a blind or partially sighted person?

The touch tour, introductory audio notes and the audio description come as a package and will allow for a greater experience for someone who is blind or partially sighted. I find that as a blind person the notes give me some images in my head of the set and characters. The touch tour is like a colour-in of that image, touching the props, meeting the actors and taking in the space by moving around on stage. The audio description gives me the full viewer experience. Not everyone chooses to take advantage of the whole package. For example, somebody who can see well might not need the audio description if they sit at the front, but will benefit from the introductory notes. Some people are not interested in the introductory notes and some won’t go on the touch tour because they have their own images of what things look like. It’s very individual and people can choose what they want and need.

What types of performances are the most popular?

West End musicals such as Lion King, Oliver, and Wicked which already have a wide appeal tend to be popular. However, there are people who like to go to see straight dramas, new writing, opera and ballet as well.

Are there any specific shows where description is requested more often than others?

This happens with popular shows like Oliver, where tickets get sold out shortly after they are announced on our site.  These ones are always going to be audio described. Clyebourne Park, a play we first described at the Royal Court Theatre, also grew in popularity and as it was moved to the West End, we chose to describe it there as well.

How do you decide which shows to describe and how do you make it happen?

It depends on the theatres and it depends on relationships we have with them. Some theatres will provide an audio described performance of every production and contact us to make it happen. We will contact others who are putting on popular shows to offer our services and/or make them aware of audio description. We have also had blind and partially sighted people contacting us to ask whether a show which has not been listed on our website is described. In those cases we approach the theatre in question and advise them that there is an audience interested in seeing a certain show audio described.

How do you pick your describers?

It’s important that an audio describer is good at writing and presenting their own work as well as having a good voice. We have a number of freelance audio describers who have worked with us for many years. They receive regular training on our describer’s away days once a year. Our describers usually have some kind of art connections, whether they’re writers, broadcasters, theatre show producers etc.”

How does the process of putting together an audio description work?

We have two describers per show, one describing the first part and one describing the second.  This is because we want to ensure quality. The two describers go along to see the show and take notes. They also get a DVD with that very performance so that they can watch it again, amend their notes and write their scripts. They then compare notes. This is to make sure that nothing is being missed out. The night before the audio description of a show, they have a dry run. One describer sits in the audience listening to the other one describing. After the interval they swap places and when the show is over, they go through the scripts again and make final adjustments. Accuracy is important in making the audio description good. It has to be detailed, but not interfere with the dialogue of the production.  It also has to be live because theatre is live and the describers have to let their listeners know about everything that goes on, including spontaneous audience reactions.

You were in the Guinness book of Records in 2008 when 168 blind and partially sighted turned up for an audio described performance of Les Misérables to celebrate your 10th anniversary. How did that make you feel?

It felt fantastic! And it was the perfect way to celebrate ten years as a company.

To find out more about VocalEyes including the types of events they describe go to their website:http://www.vocaleyes.co.uk/ . You can also subscribe to their free newsletter which is sent out in either large print, Braille, CD or via email.