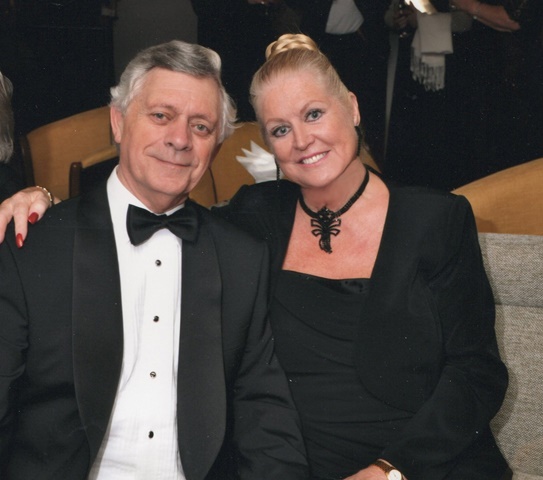 Kim Woodburn rose to fame in 2003 as part of TV Duo Kim and Aggie in ‘How Clean is Your House’. Since finding fame at the age of 61, she’s become known for her customary up-do and bubbly persona. Recently, her life was turned upside down when her husband, Peter, suffered a stroke. By Kiesha Meikle.

You are well known for being, efficient and for having a can-do attitude, but you must have felt pretty helpless when your husband Peter suffered a stroke. What happened?

“The Saturday evening (before his stroke on the Monday) we were sitting reading the papers and he couldn’t get his words out. Peter was reading something to me and he couldn’t get one word out: Bashir.  He was trying to say Bashir – the reporter’s name – but he couldn’t say it. He said to me after he read it, that he had a shocking headache on the left side. So off he went to bed. The next day he was in the garden, pottering around wearing backless mule slippers.  He kept losing his slipper, he had his bare foot on the pebbles in the garden but he couldn’t feel it. Then on the Sunday evening he said ‘I have a bit of a headache’ – I said ‘go to bed’ and that’s it. What I didn’t know, is that he was still suffering these symptoms…he just didn’t tell me. If he had told me, I would have called an ambulance right away.

“On the Monday morning it was sunny, so we sat in the garden. He brought me over a cup of tea and it was spilling everywhere. You couldn’t miss it. I said ‘what’s going on?’ He said ‘I just don’t feel good’. He told me that he still could not feel his feet on the pebbles. He said ‘I’m numb down my right side, and the right side of my face by my ear, my hand.’ And I knew he’d had a stroke. I rang for an ambulance. He was discharged with medication, which he will be on for the rest of his life – he will also continue to have frequent check-ups. He may not have another stroke, but now he has a higher chance than before. He had no paralysis, and you wouldn’t tell from looking that he’d had a stroke apart from him slurring his words. But he has no short-term memory at all.”

Before this happened, was there any clue that Peter could have a heart attack?

“Nothing at all! Peter’s mother and father had low blood pressure, he inherited that. He never needed pills… You wouldn’t have thought him a target for a stroke.But the doctors asked: why wouldn’t you expect he’d have a stroke? Babies can have them – they occur at any age. They are all severe but some are much more severe than others. You have to be grateful and stay positive.”

How is Peter now and what affect has this had on the both of you?

“He can remember up to about three or four years ago of his entire life, but ask him to recall what he did this morning, he doesn’t know. He’s stopped slurring his words, but he can’t get out the odd word out. He panics a lot now, when he was always a laid back man before. He’ll misplace words – he knows what he wants to say but just can’t remember specific words. He does that a great deal. He also has a slight limp. I tell Pete: ‘Listen, you had this stroke, but you don’t have to work, no-one would know from looking, remember that there are people in terrible states.’ I had a rotten childhood and it doesn’t leave you as an older woman. But honestly, people have had a worse childhood than me. It’s not that you forget there are people worse off than you – its gets you through.”

You did more than just getting through in your career. How did you manage to get a television program on cleaning houses and do you have any tips seeing as Spring is on it’s way?

“I know people laugh, but I’ve always loved cleaning, it’s therapeutic, it keeps you fit, the joy of a clean house. To me, it means a great deal. I love it! To know where everything is – a tidy mind. I walk around the house and it gives me a thrill. It doesn’t everybody – but it certainly does for me. Clean as you go and throw as you go! Don’t let a room mount up and up. Half an hour here leaves you less hard slog later.There are always going to be certain things in the spring you do – like closets. I’ll put winter clothes out of the wardrobes. Some people never clean them but they get dusty, and moths will just ruin your clothes.”

So, you Spring clean your wardrobe too?

“Oh yes! You have choices – charity shops or commission shops where they’ll sell them for you for a little profit. If you have something that just sits there – give it away to someone who needs it – get rid of the junk!”

Kim is an ambassador for Stroke Association. Info can be found at: www.stroke.org.uk.

1 thought on “Kim Woodburn: Spring cleaning and life after a stroke…”